The Solution to Problems in Learning Chinese

Learning to read well in any language requires spending a significant amount of time actually reading. This is as true with Chinese as with any language, but for those learning Chinese as a second language, a number of issues intrinsic to Chinese make reading much more difficult than with most other languages. Chinese Toolbox was created specifically to help one overcome the challenges of learning Chinese. These challenges are related to Chinese characters and Chinese words.

For westerners seeking to learn Chinese, just about all problems boil down to the following three points:

Traditionally, one learns to write characters while learning to read them. Children in Taiwan and China spend many hours writing and learning to read several characters each week, and their reading material is based mostly on what they’ve learned to write.

Adult learners of Chinese normally do not have the same luxury, and as a result, reading progresses much more slowly, so slowly that learning to read can be extremely frustrating. Chinese Toolbox was designed to significantly pick up the pace of reading among adult learners. Learning to write Chinese is recommended, but with Chinese Toolbox, you don’t have to learn to write characters before you read them. Just import any Chinese text that you would like to read into Chinese Toolbox. When you select a character (via mouse or keyboard), the character entry is shown in the Character Dictionary window.

Chinese Toolbox makes it very easy to read Chinese and to keep track of what you’ve learned. Reading provides exposure to the Chinese language; the more you read, the more exposure and familiarity you’ll have toward Chinese characters. And if you can recognize Chinese characters, you can also write those characters using a computer.

The following is part of a story about colors:

Notice how everything is run together. Chinese does not use spaces to delineate words. Just knowing where words in Chinese begin and end is a huge challenge to most people learning Chinese as a second language.

When the same text is viewed in Chinese Toolbox (below), the relationship between characters and words of Chinese is immediately apparent. For those with some experience in Chinese, just knowing where the words begin and end may be sufficient to be able to read a document. 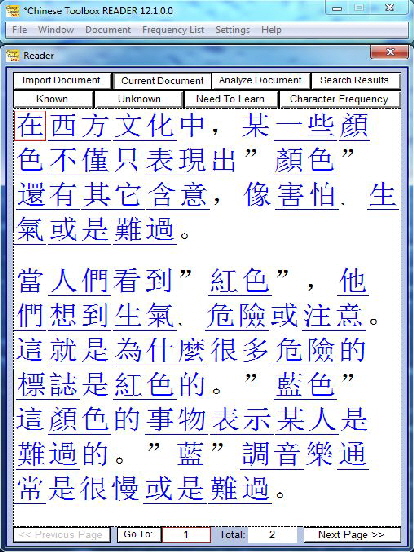 The greatest problem in learning the Chinese written language may simply be the volume of information, and this has everything to do with the Chinese writing system: characters. This is addressed in Chinese Toolbox via the system, Marking for Unassisted Reading. When you mark a character or word as Known, it is essentially removed from your list of things to learn, and you can focus your study effort on characters and words that you don’t know. Reading frequently provides the mental refreshing of what you had previously learned. As long as you read regularly, a flashcard type of review is not as necessary. Of course, if you don’t read much Chinese, you will gradually forget what you’ve learned, and flashcard review will seem to be the thing to do.