Release Notes and Summary of Changes 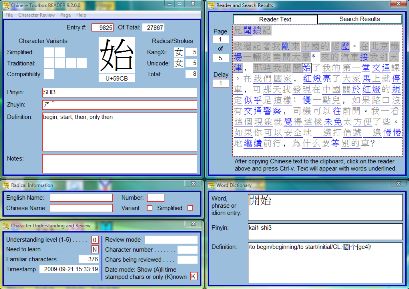 The remainder of this page describes the new features in Chinese Toolbox READER.

General Information about the Word Dictionary

The word dictionary file (cedict_ts.u8) is read from disk each time the program is started. While loading, an internal memory structure is created which is accessed during the running of the program. When you paste text into the reader, the reader checks each character to see if it’s included in the word dictionary memory structure. If so, the character is underlined, along with any adjacent characters that are part of the word.

Not all of the entries in the word dictionary are used by Chinese Toolbox READER 9.2. Those currently not used include the following: