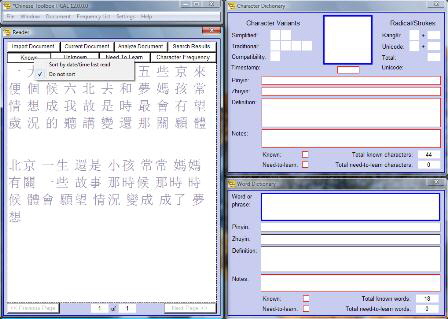 With the Known Tab context menu you can set whether to sort characters in timestamp order. When sorting is enabled, characters with the oldest timestamps appear closer to the top of the Reader. This replaces the feature, Character Review in Timestamp Order, in previous versions of Chinese Toolbox.

Character timestamps are updated each time characters are selected or read via the Reader. When you click on the Known tab with character sorting enabled, the first character displayed is the one you haven't read for the longest. If you review the characters near the beginning of the list, you can ensure that all the characters you've learned remain fresh in memory. Not refreshing your memory of characters (via reading or writing) is how you start forgetting what you had spent so much time previously to learn.

Chinese Toolbox makes it easy to keep all your learned characters fresh in memory.

See the February 2018 updates for
← Chinese Toolbox and Toolbox Coding →