Chinese Toolbox 2013 (13.0.1.0) is mostly a filling-out and polishing of what already existed in CT 2012. Many code corrections have been made, and all known problems have been fixed. A complete list of the changes to CT 2013 exists at the CT 2013 Version History page. This What’s New page provides some explanation where needed.

The main improvement in this release is the removal of all import and export restrictions in TRIAL and FREE modes. Several code corrections were made as listed in the Release Notes.

Near the middle of the Settings dialog is a setting titled “Include words of this character type in search results.” You can set this to (1) Simplified, (2) Traditional, or (3) All characters. This affects searches initiated from the Search window and searches from the character entry context menu. The default setting is Simplified.

The major new feature of CT 12.1 is Word Dictionary editing. You can edit existing entries, exclude entries, and add your own.

The word dictionary used in Chinese Toolbox  is CC-CEDICT. It comes from MDBG.net and is stored in a file (cedict_ts.u8) in the Chinese Toolbox program folder. This file is loaded each time Chinese Toolbox is launched. As a publicly supported dictionary, submissions can come from almost anyone (http://cc-cedict.org/editor/editor.php), and no one person has control over the content of the dictionary.

How to Add a New Word Entry

How to Edit an Existing Word Entry

Just type in a Pinyin or Definition field. The contents of Pinyin and Definition fields in the Word Dictionary window can be edited whenever a word entry appears. If anything is changed in either of these fields, the entry is considered “customized”.

How to Remove Customization

There are two kinds of custom word entries: (1) those that already existed in the word dictionary (supplied in the file cedict_ts.u8), (2) and those that were added manually as described above. When you click on the “Remove Customization” button in the Word Dictionary window, the changes you previously made are reversed. If you created the word entry yourself, then removing customization removes the word from the custom list. If you edited an existing entry, clicking on “Remove Customization” restores the original Pinyin and Definition of the word entry as it exists in cedict_ts.u8.

How to Exclude a Word

This is actually an older feature, but it hasn’t been documented except in the “Help Keyboard” window of Chinese Toolbox. 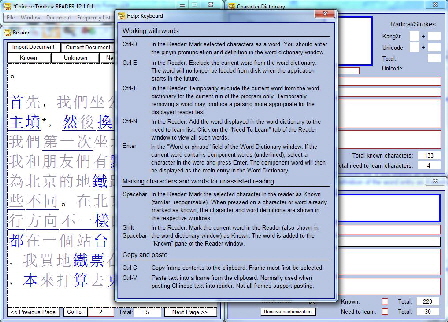 There are two ways to exclude a word dictionary entry:

When you quit the program, your custom words are written to a binary file (CustomWords.dat) in your Chinese Toolbox documents folder. To view or use these in another program, you need to export these to a text file using the “Export custom words” menu item on the File menu. CustomWords.u8 will be written to your Chinese Toolbox documents folder. This is a UTF-8 text file and can be read by most text editors. You can change the name of this file to CustomWords.txt or CustomWords.utf8 according to your preference.

The second major improvement was Reader navigation. A Go To button and field has been added to the bottom of the Reader. To jump to a specific page,

Now, Chinese Toolbox retains current page and selected character information for each document. So when you switch to another document (via the Document menu), the page you were on last time and the character selection will appear when the document is shown again.

For information on other features of Chinese Toolbox 2012 (12.1), refer to the list of features.